A benchmark to find out which product review apps don’t slow down your Shopify store, plus some interesting observations.

Have you ever visited an online store where the amount of time it takes for it to load makes you wonder how can people be patient enough to buy products from them?

Are you certain your own Shopify store isn’t slowed down by all the apps and features you have added?

Let’s say you want to allow your buyers to add product reviews.

The benefits are clear.

Product reviews can provide reassurance for your customers before buying. This kind of credibility and social proof can boost sales, since people like to know they are buying popular products. Plus, your store gets to show how much people like to engage with it.

However, adding any app to your store is going to require multiple assets, which means that the pages will take more time to load.

This is a guide to measure the actual impact of the most popular review Shopify apps, and find out which ones are the most performant, and which ones will add unnecessary extra load time.

What we need here is a basic product reviews feature.

People can click on a button to add a review to the product. Reviews, either automatically, or after the admin’s permission, get published and are shown on the bottom of the product page.

The testing store where the apps were installed had a completely stripped down and lightweight theme. The performance was measured with Lighthouse.

Every time a new app was installed, the theme was completely cleared of leftovers from the previous one.

To make sure the results were accurate, three mobile device audits were run for each app on the product page. 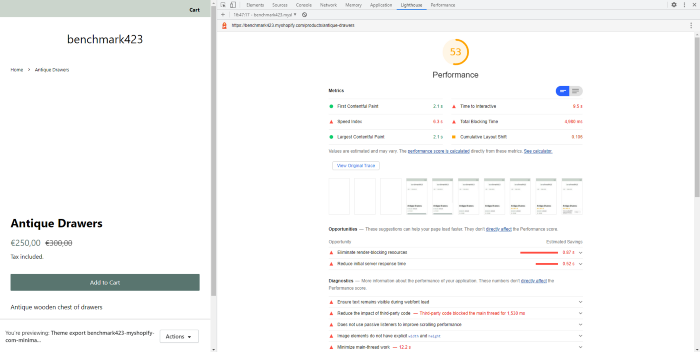 The apps that were selected are the most searched, most recommended and most installed available, with a good overall rating. These are:

A side note: Shopify’s own app, “Product Reviews”, which at the time of writing has a rating of 3.7/5 in the Shopify app store, had issues with the installation, and was unable to be tested. 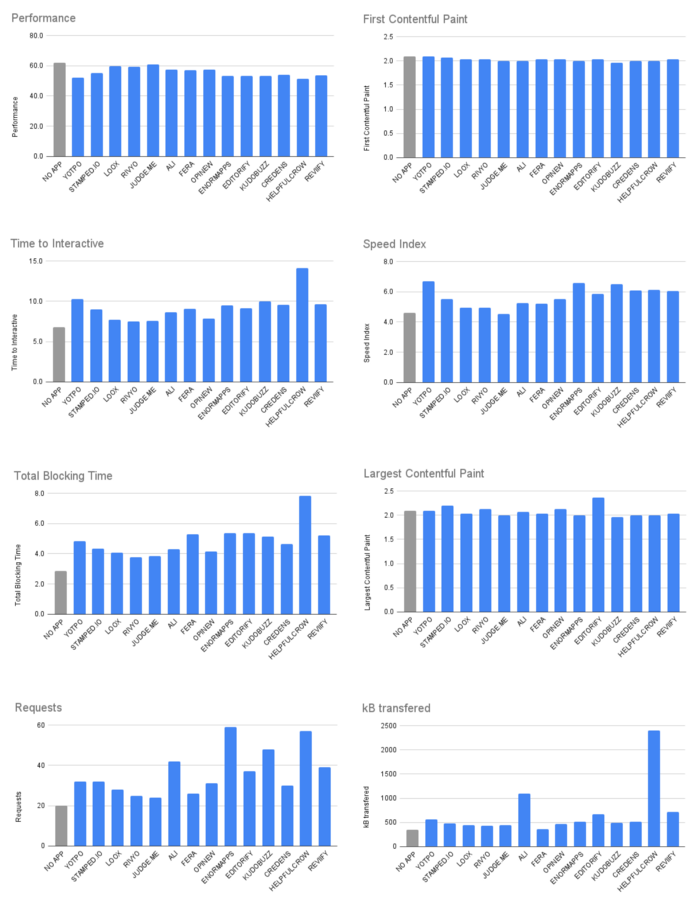 Charts 2–6 are measured in seconds

Before getting to the actual speed measurement results, a few observations about some of the apps.

Looking at the results, it’s obvious that Judge.me is the lightest review app from the ones I tested.

It cost only 1 extra Performance Score point in Lighthouse. Had about 0.5 second less blocking time than most others, and a speed index 0.5–2 seconds faster. With it, the product page was interactive 7 seconds earlier compared to the slowest app.

I also had no complaints with the app itself when it comes to setting it up and posting product reviews. 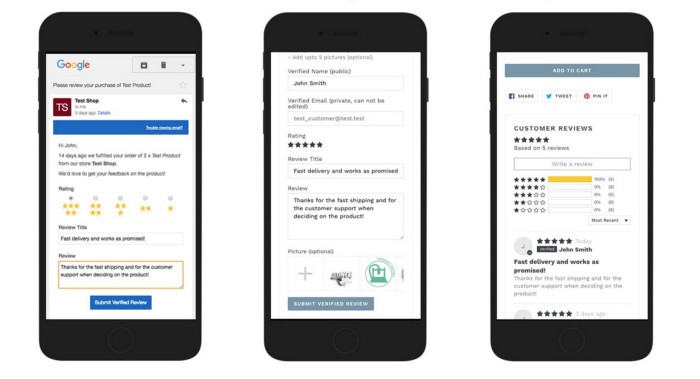 There are almost no Shopify stores running with zero apps. Even though the platform provides a lot on its own.

When adding apps, we need to keep a balance between the benefits (trust created by reviews in this case, and conversions) and the cost in speed, SEO and user experience (resulting in a decrease of conversion rate).

Imagine having 10 apps running on the site, where each one adds 1 second of load time. We can’t have that, and that’s why I tested all these apps to measure their exact impact.

If you’re interested in keeping your site as fast as possible, while collecting emails, check out this similar benchmark.